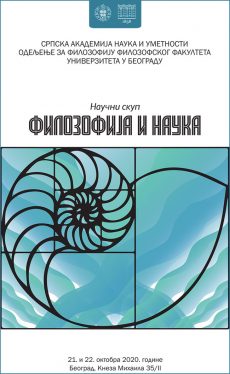 A two-day scientific conference ’Philosophy and Science’, organized by the Serbian Academy of Sciences and Arts and the Department of Philosophy at the Faculty of Philosophy of the University of Belgrade is to open at the SASA Grand Hall, on Wednesday, 21 October, at 9.30 a.m. This is an event which at one place for the first time in Serbia will bring together scientists and philosophers whose professional interest lies at the intersection of science and philosophy.

Apart from philosophers, mathematicians, theoretical physicists, astronomers, biologists, physicians, and psychiatrists, psychologists of various profiles, archaeologists, anthropologists, art historians, and experts in classical sciences will speak at the conference. The goal is the improvement of the already existing cooperation between philosophers and scientists, as well as laying the foundation of the future constant and institutionalized dialogue.