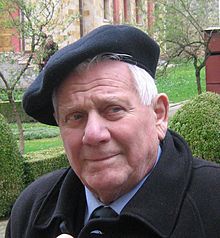 At a session held on Dec. 14, the jury of the Dositej Obradović Life Achievement Award unanimously decided that Academician Dimitrije Stefanović was the laureate for the year 2018.

“At a time when church music in Serbia, particularly that of Orthodox provenance, could not be easily performed in public, nor was it a subject of study in music schools and academies, musicologist Academician Dimitrije Stefanović brought together young people of different levels of education and interests and thus launched a long process of studying and performing old music discovered in Byzantine, Latin, Russian and old Serbian manuscripts. Under his direction, the Study Choir of the SASA Institute of Musicology held concerts in many countries around the world, including Austria, Germany, England, France, Spain, and Italy. It was a spiritual and ethical rise accompanied by propagation of theretofore little known Orthodox music culture in Europe, as well as an exchange of experiences with people of different religious affiliations, for whom this was their first encounter with the Balkan musical tradition. For decades now, this zeal of enlightenment has been building bridges that linked Serbian culture and Orthodoxy with the cultures of other nations and religions. Academician Stefanović’s optimism and readiness to meet young people, share experiences, songs and even problems with them is an example of the incredible perseverance of the spirit of enlightenment which, as a nation, we received from Dositej Obradović himself,” the jury’s decision states.

The members of the jury were Vojislav Jelić (president), Slavko Gordić, Marko Nedić, Dragan Simeunović, and Mirko Vasiljević. The award is bestowed by the Dositej Obradović Legacy with the support of the Ministry of Culture and Information, and it includes a diploma and a sum of money. The National Bank of Serbia will present to the winner a plaque bearing the image of Dositej Obradović. The award will be presented at a special ceremony.