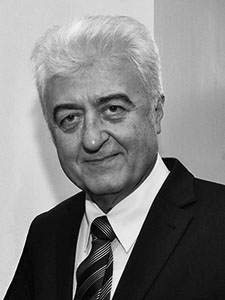 It is with great sorrow that the Serbian Academy of Sciences and Arts announces the death of the full member of the Department of Medical Sciences Milorad Mitkovic, aged 70 (b. Lebane, 7 June 1950), vice-president of the SASA Branch in Niš on 7 April 2021 in Niš .

He was employed at the Faculty of Medicine of the University of Nis (a full professor since 2004), while also being the head of the Clinic of Orthopaedics and Traumatology of the Clinical Centre of Nis (1994-2015).

A SASA corresponding member he was elected in 2012 and a full member in 2018. Since November 2018, he was the vice-president of the SASA Branch in Nis.

Milorad Mitkovic carried out the most significant scientific research and achieved practical results that were internationally recognized in the field of orthopaedic surgery and traumatology, biomechanics, experimental surgery, particularly in the treatment of bone fractures, in the correction of various types of deformities, in limb lengthening by the use of Mitkovic external fixation system and a combination of external and internal fixation, in arthroscopic knee surgery and implantation of artificial hips.

He realized 12 scientific projects (two having been based in Switzerland) at the same time patenting 44 inventions under his name (in the country and abroad). He published over 400 scientific papers and six books.

Since he designed the system of external fixation of bones, it carries his name (Mitkovic external fixation system), and having been tested in Yugoslavia, Serbia, Germany, Switzerland, it was used on more than 25.000 patients in Serbia and abroad, including the treatment of the wounded in the conflicts at the territory of the former Yugoslavia.

Academician Mitkovic founded a school of external and internal bone fixation in Nis, where nowadays numerous orthopaedic surgeons from the country and abroad have been educated. He is the founder and head of an orthopaedic clinic in Kuwait.

He is a recipient and holder of numerous awards and recognitions, the most prestigious being the Grand Gold medal of the Institute for Orthopaedics and Traumatology from Riga, 1988, First Prize for an invention in SFRY, 1989, ‘EUREKA’ Gold medal, Brussels, 1990, Mihajlo Pupin Gold medal, 1994, Nikola Tesla Gold medal, 1996, Gold Plaque of the Clinical Centre of Nis for a remarkable international representation, 1998, 11 January Award  – recognition of achievement of the City of Nis, 2012, Grand  Seal Prix of the Serbian Medical Society Award, 2014, Medal ‘Dr Vladan Djordjevic’, MMА, Belgrade, 2015.

His passing represents a great loss for the Serbian Academy of Sciences and Arts and world medicine.