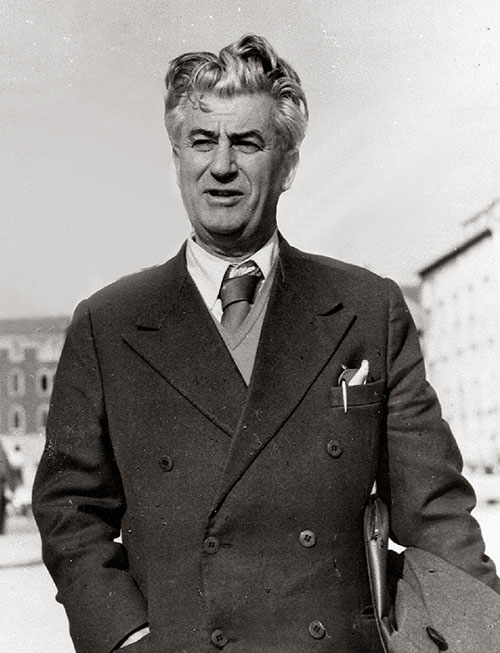 In 2022, the Serbian Academy of Sciences and Arts marks The year of Academician Nikola Dobrović (b. Pécs, 12 February – d. Belgrade, 11 January 1967), one of the most renowned Serbian and Yugoslav architects of modern times.

He made a considerable contribution to urban open pioneering trends of the architecture of his times, with his projects, plans, competition papers, built objects, texts and educational work.

His studies of architecture in Budapest started in 1915 were interrupted by the mobilization. He continued them in 1919, in Prague, where he graduated and worked as an architectural designer, first in Prague’s prestigious architectural offices, followed by the work in his designer firm after the liberation.

Professor Dobrović joined the anti-fascist movement in 1943, and then he began his brisk professional fight for intensive and rapid reconstruction of the war-torn cities. He worked on the creation of the General plan of post-war Belgrade and was appointed the head of the construction of Novi Beograd.

As a professor of urban planning at the Faculty of Architecture of the University of Belgrade, Dobrović passed on his experience as a practitioner and heralder of progressive ideas of construction, therefore, a series of generations were formed under his strong ideas and educational influence, among whom many later gained prominence, both in the country and abroad.

He turned his job of theoretical thinking and design experience into a written work, leaving behind fourteen books in the field of history, theory and technique of urbanism and modern architecture, as well as a large number of texts, studies and essays, in which, among other things, he advocated suggestively and successfully the principles of ‘Theory of architecture of animated space’, which would make him a unique architectural thinker in our country and the world.

Nikola Dobrović received a number of very significant recognitions for his work and overall achievements.

He was elected a corresponding member of SASA in 1961 and a full member in 1965. He was also a member of JAZU (from 1963) and an honorary member of the Royal Institute of British Architects (RIBA).

Academician Dobrović left an indelible and original mark in space, and in addition to Yugoslavia, he worked in the Czech Republic and Hungary. With his enticement and contemporaneity of the ideas, he achieved a modern impact and garnered a great number of followers and admirers.