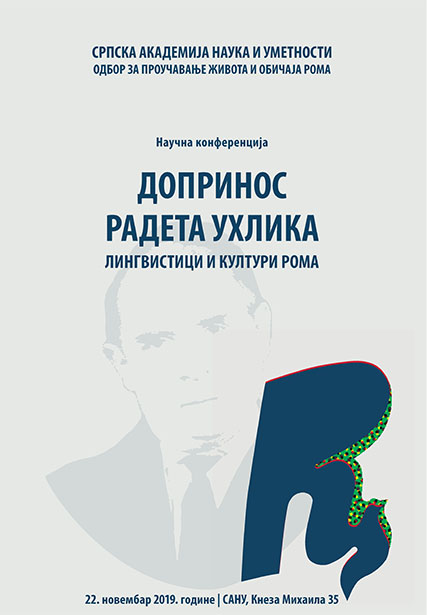 The SASA Board for the Study of Life and Customs of the Roma marks its anniversary with a scientific conference ‘Contribution of Rade Uhlik to the Linguistics and Culture of the Roma’ which is to be held at the SASA Grand Hall, on Friday, 22 November, at 9.30 a.m.

A member of the Academy of Sciences and Arts of Bosnia and Herzegovina Rade (Aldar) Uhlik (1899-1991) is the most prominent scholar of the Romani studies of the former Yugoslavia, given his wide range of scientific interests. The work of Rade Uhlik has contributed to a better understanding of the culture and language of the Roma communities of the Balkans, but also to the further development and standardization of the Romani speech in this region. However, his linguistic studies dedicated to virtually all the Romani speech of Yugoslavia, have remained excluded from the consideration of contemporary Romani studies, due to the language barrier. Most of them have still not lost their current scientific relevance.

The conference aims to shed light on the significance of Uhlik’s linguistic research of the Romani speech in Yugoslavia (in the field of dialectology, morphology, syntax, semantics, pragmatics), lexicography (Bosnian Romani: a vocabulary (three volumes) (1941-1943), Serbo-Croatian – Romani Dictionary (Romane Alava) (1947) and Serbo-Croatian-Romani-English Dictionary(1983), translation of the Gospel of Luke into the Romani language and extensive collecting work in the field of the Romani folklore and Romani tradition culture.

The conference’s work is planned into three panels. The first, introductory panel will be dedicated to the life and work of Rade Uhlik. The second panel focuses on his folkloristic opus, and the third discusses his linguistic work.
The purpose of this scientific conference is to significantly supplement the knowledge about the history of the Romani studies as a scientific field in Serbia and the region.