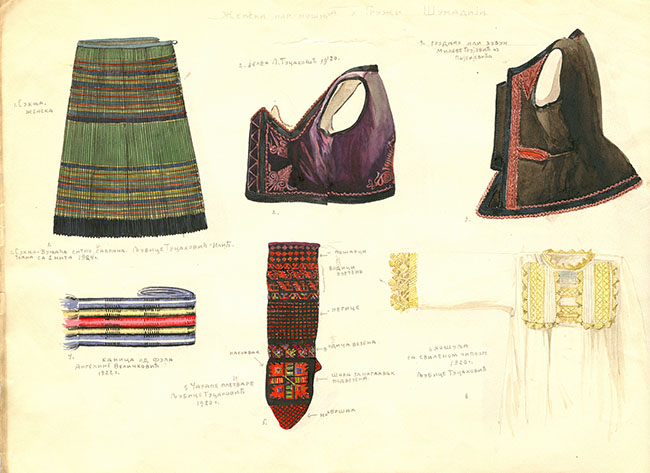 Dreams of the Past and Tradition: Olga Benson

On the occasion of 130 years since the birth of painter Olga Benson, the exhibition ‘Dreams of the Past and Tradition: Olga Benson’ will open at the SASA Gallery of Science and Technology (2 Đura Jakšić Street), on Monday, 23 December, at 6 p.m.

Olga Benson worked at the Institute of Ethnography of the Serbian Academy of Sciences as a folklore painter in the period 1947 – 1950 when she immigrated to the United States. The Institute’s collection encompasses over 500 drawings and watercolours of hers (house, furniture, folk costumes and their parts, sketches of folk costumes, vignettes for the Bulletin of the Institute of Ethnography, etc.) which have not been published yet.

The exhibition also sheds light on which aspects of traditional, tangible culture existed in the field in the 1950s, which experts deemed worthy of preservation.

The very manner of systematic recording within ethnology of what was considered important before the widespread availability of colour photography will also be explained, thus clarifying the relations between the visual material being created and ethnographic research at the time of creation of collection when these works of art were considered documentary and in modern times when they are treated as sources of knowledge on the past, both on various aspects of tradition and on the development of ethnology/anthropology as disciplines.
The exhibition lasts until 25 January 2020.