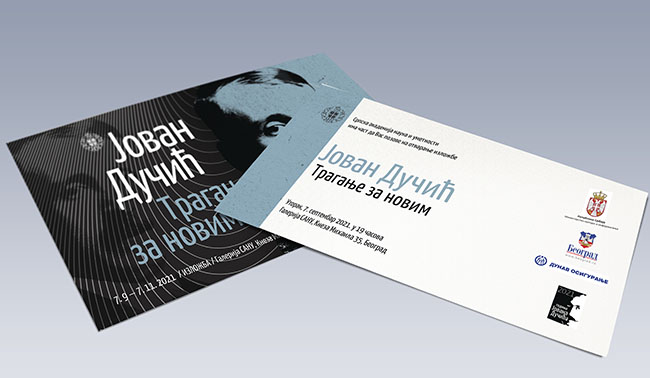 The exhibition ’Jovan Dučić – In Search of the Novel’, curated by Academician Zlata Bojović, opens at the SASA Gallery, on Tuesday, 7 September, at 7 p.m.  Academician Vladimir Kostić, SASA president will open the exhibition.

On the occasion of the 150th anniversary of his birth in the year 2021, SASA marks the year of Jovan Dučić, therefore a ceremonial session, scientific conference and exhibition are to be organized.

Dučić belongs to the line of the most significant literary creators of the more recent Serbian literature to whose general value he gave a major contribution with his poetry and prose, and on which he made an indelible mark, thus leaving a profound impact on the generations of Serbian poets of the 20th century.

Long has he born the title ‘the prince of Serbian poets’ and throughout his literary path, he defended it by his work, self-deprecation, and high aesthetic standards and above all, by his complete commitment to the quest for perfection.

Dučić’s entire life, multi-faceted and replete with temptations and experiences – beginning with the schooling in the native Trebinje, Mostar, Sarajevo, Sombor, over his teaching jobs in Bijeljina, Žitomislić, Mostar, and his studies in Geneva and Paris, followed by his participation in the cultural life of Belgrade, development of a successful diplomatic career in more than three decades, which led him to great cultural centres of Europe of which he had been worthy, to recognitions he had received including the election to the membership of the Serbian Royal Academy which he considered the greatest – it was basically shadowed by his commitment to the creation and reaching perfection. His personal, often eventful life was also filled with joy, mistakes, unfulfilled wishes and disappointments, having been marked by his perfection aspirations. All the impressive testimonies from various travels, which were his passion and literary inspiration and pleasure, also bore this mark.

Jovan Dučić and everything he created, were equally marked for life by his uninterrupted connection both to his homeland, particularly to his native Trebinje where he had only spent his early years of life until the end of primary school, and to the origin of his family. This intangible connection is clearly and undoubtedly recognized in the wishful thinking about a baroque ancestor Duka Vladislavić Raguzinski and in golden dreams in which he contemplates, sometimes thousands of kilometres away, ‘observing’ from ‘Leutar’ human souls and destinies, Herzegovina, Dubrovnik sea, many friends, among which there are various writers, his contemporaries with whom he shares letters and lives the life of his homeland writing his entire biography. It was probably this connection that was the most enduring foundation of his unreserved patriotism, for which he would often pay dearly, and which was one of the symbols of his personality from his early youth until the end of his life.

The Dučić, travelling down a very long road, made an enduring mark, starting with his first collection of poems – ‘Pjesme’ [Poems] printed in Mostar in 1901, which must have been the most remarkable personal literary joy, over the Belgrade editions of two collections of poems ‘Pesme’ [Poems] and ‘Plave legende’ [Blue Legends] from 1908, ‘Pesme’ [Poems] from 1911 and several hundred letters and poem series printed in literary magazines and journals, essays and reviews of his literary contemporaries’ works, contemplations on philosophical themes, art, and travelogues, translations of favourite foreign poets and articles about them (Pushkin, Mickiewicz and others), political articles, all the while everything found its way into ‘Sabrana dela’ [Collected Works]  and ‘Lirika’ [Lyric Poetry] which was published on the day of the writer’s death.

The exhibition ‘Jovan Dučić – In Search of the Novel’ showcases this prominent member of the Academy as a writer, diplomat and endowment donor. It follows Dučić’s exploration of style and form in literature, manners to affirm his people within European tradition and efforts to make ‘Milo Trebinje’ [Dear Trebinje] the centre of culture.

The exhibition lasts until 7 November, and with this exposition, SASA joins the popular campaign ’European Heritage Days’.