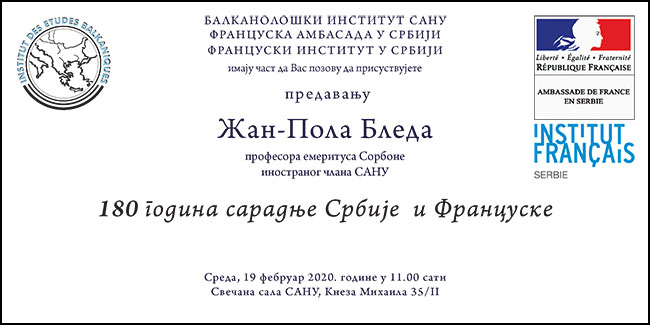 The Institute for Balkan Studies of SASA, in cooperation with the Embassy of the Republic of France and the French Institute is organizing the lecture of the SASA Foreign Member and Sorbonne Professor Emeritus Jean-Paul Bled on Wednesday, 19 February, at the SASA Grand Hall, dedicated to the 180th anniversary of cooperation between Serbia and France. On that occasion, Jean-Paul Bled will talk about 180 years of cooperation between Serbia and France, the history of their relations, political, economic and cultural ties. The lecture of the eminent French historian is the final event of the jubilee celebration – 180th Anniversary of French-Serbian Diplomatic Relations – organized by the Embassy of France over the course of the last and this year.

Professor Jean-Paul Bled, a Germanist and an expert on the history of Central Europe is one of the foremost authorities of political and social history of Germany and the Habsburg Monarchy. He has written several biographies of key figures of German and Austrian history – Franc Jozef, Maria Theresa, Frederick the Great, Bismarck and Franz Ferdinand. He has been awarded a dozen times by major French institutions.

He has constantly been in touch with our scientists and has participated in SASA-organized gatherings, and he has also produced two proceedings dedicated to Franch-Serbian relations.

Academician Mihailo Vojvodić will give a welcome address at the upcoming lecture. The lecture will be delivered in French and simultaneous interpretation is provided.