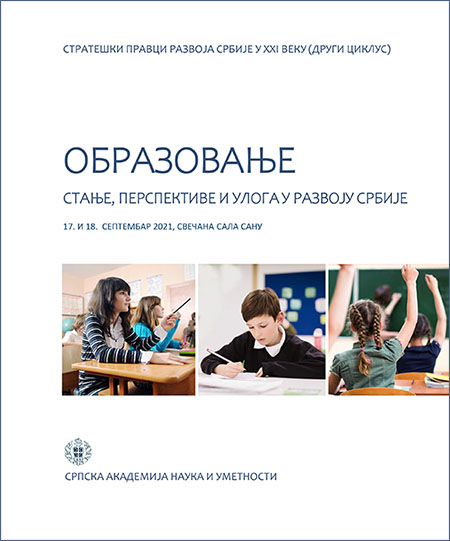 SCIENTIFIC CONFERENCE: ’EDUCATION: THE STATUS, PERSPECTIVES, AND ROLE IN THE DEVELOPMENT OF SERBIA’

Scientific conference: ’Education: the Status, Perspectives, and Role in the Development of Serbia’

A two-day conference on the status, perspectives, and role of education in the development of Serbia is set to open at the SASA Grand Hall, on Friday, 17 September, at 10.30 a.m. This conference is organized as part of the series ’Strategical directions of Serbia’s development in the 21st century, which was launched in 2012 to give insight and contribution to the vital questions of the country’s development, such as education, science, culture, industry, and forms of government.

The first volume started eight years ago with a conference on education, which is also the topic that launches the second volume.

The conference ‘Education: the Status, Perspectives, and Role in the Development of Serbia’ consists of several parts. The beginning will feature two general presentations on the measures taken in education policy in Serbia since 2012, which will be explicated by the minister of education, science and technological development Branko Ružić (The Power of Knowledge) and Professor Ivan Ivić (Critical Analysis of Educational Policy and Current State in Education of Serbia).

After that, in the next section, some of the most important issues of higher education in Serbia will be analysed and possible solutions will be proposed for it to become more socially responsible and beneficial. Academician Vladimir Bubaširević will talk about academic freedoms and institutional autonomy. The Corresponding Member Vladica Cvetković will give a lecture on the topic ‘Why Higher Education is Impossible to Reform?’, while Professor Branko Urošević will focus his lecture on higher education concerning the developmental needs of Serbia in the era of global digital transformation.

The attention will then concentrate on teachers and their place and role in the development of educational policy in Serbia. Professor Ana Pešikan will speak on the topic ‘Lost in Translation – Teachers in Serbia: Subjects and Objects of Change’, followed by Professor Aleksandar Kavčić’s lecture ‘The Danger of Experimentation in Education: Let’s Give the Initiative to Teachers’.

Academician Vladimir Kostić, SASA president, will give his view on one of the most vital questions when it comes to the purpose of education – ‘Formation of the Cultural and Intellectual Elite: How to Educate the Future Leaders of Serbia’s Development’.

On Saturday, 18 September, Professor Slobodanka Antić and Jelena Stevanović, PhD, will talk about the literacy of children and young people in Serbia nowadays, followed by lectures on textbook problems delivered by Professor Slobodanka Antić, grammar school reforms by Rade Zejak, the position of dual education in the educational system by Sarita Bradaš and the essence and concept of digitalization in education by Miloš Bajčetić, PhD, after which a discussion will start.

This conference aims to recognize the entire current state of education in Serbia. The main goals are the presentation and analysis of the vital data on the specified topic, critical analysis of trends in the education development from 2012 when The Strategy for the Development of Education in the Republic of Serbia until 2020 was adopted, as well as the examination of these findings in light of the possibility of education being Serbia’s development resource.

Based on the analysis and insights, recommendations on the improvement of education in Serbia will be put forward and submitted to all relevant state and educational institutions.

The scientific conference is available on the SASA website https://www.sanu.ac.rs/direktan-prenos/