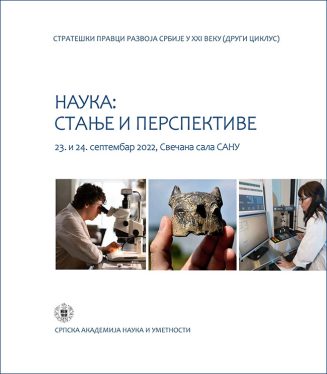 As part of the second series Strategic Directions of Serbia’s Development in the 21st Century, the scientific conference dedicated to science, entitled Science: the Status and Perspectives is to be held on 23 – 24 September at the Serbian Academy of Sciences and Arts. The opening of this event is scheduled at the SASA Grand Hall, on 23 September, at 10 a.m.

The conference will examine relevant problems of science in Serbia, from its funding to scientific production. The particular significance of this conference lies in the emphasis on comparative analyses of key aspects of science in Serbia and EU countries, which provides an insight into the current status of science in Serbia based on various parameters (GDP percentage invested in science, the number of papers in the previous ten years, the average number of papers per researchers, etc.). The production in various scientific fields will be a stand-alone topic, with strong stress being placed on the relations between social sciences and humanities, on the one side and other sciences, on the other side.

After the conference, the conference proceedings and special publication are envisaged, in which statistical analysis of all relevant factors affecting scientific production, both in Serbia and the European Union, will be provided.

A direct broadcast of the conference is available at  https://www.sanu.ac.rs/direktan-prenos/