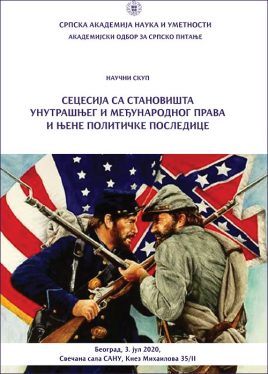 The scientific conference Secession Through the Eyes of Domestic and International Law and its Political Consequences’ initially planned for 15 April shall be organized at the Grand Hall of the Serbian Academy of Sciences and Arts on Friday, 3 July, at 10 a.m. Academician Vladimir Kostić, SASA president and Academician Kosta Čavoški, president of the Organizing Board will address the audience at the opening. This is the first conference in the series of scientific conferences of the SASA Organizing Board titled ‘A Question of Serbs’.

– This event will be dedicated to the secession and its international-legal and political consequences. Among other things, there will be a discussion about whether international legal documents and declarations allow secession, with special attention being paid to the secession of Kosovo and Metohija. A great number of participants have registered for the conference, the majority of which are from the ranks of jurists and political scientists dealing with comparative constitutional and public international law and I hope that there will be valuable and long-reaching thoughts on our circumstances and the completed secession of Kosmet – stated Academician Čavoški.

During the conference, safety measures for the prevention of the COVID-19 virus spreading will be implemented.