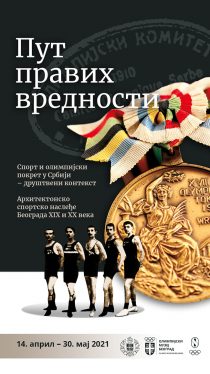 The exhibition ‘The Path of True Values’

The exhibition ’The Path of True Values’ authored by Natasa Jankovic and Marija Pavlovic, PhD opens on Wednesday 14 April at the SASA Gallery.

The history of the Olympic movement, its significance in our environment, from the Kingdom of Serbia until modern times, particularly noting the social context and circumstances in the country, will be presented at the exhibition.

The exhibition layout consists of three parts. The first part comprises the presentation of the idea of Olympism from French educator and historian Pierre de Coubertin’s times, the founder of the modern Olympic Games. The visitors will have the opportunity of learning interesting stories about the beginnings of the modern Olympic Games (1896), as well as about the Olympic symbols. The second part features the chronologically arranged participation of our athletes in the Summer Olympic Games in the period of over one century (1912-2016). The most important exhibits from the Olympic Museum fund are also displayed, from the foundation of the Serbian Olympic Club in 1910, first participation in the Fifth Olympic Games in Stockholm, the first medal won in Paris (1924) to the most recent success of our Olympic participants in Rio de Janeiro. The access to the rich multimedia collection provides visitors with the opportunity to watch short videos related to the history of Olympism in Serbia, unforgettable Olympic Games moments…

The last part is dedicated to the architectural sports heritage of Belgrade and it encompasses rare photographs, as well as the architectural plans of sport heritage of the capital of the 19th and 20th centuries. The development of sport facility architecture in Belgrade in the last two centuries has had its ups and downs. The period between two world wars, considered as the golden age of sports facilities construction, has been particularly high lightened in the exhibition.

The organizer of the exhibition is The Olympic Committee of Serbia – the Olympic Museum. The visitors will be able to see it until 30th May.

The attendance is limited to a certain number of people, in accordance with the capacity of the area, epidemiological recommendation and restrictions.