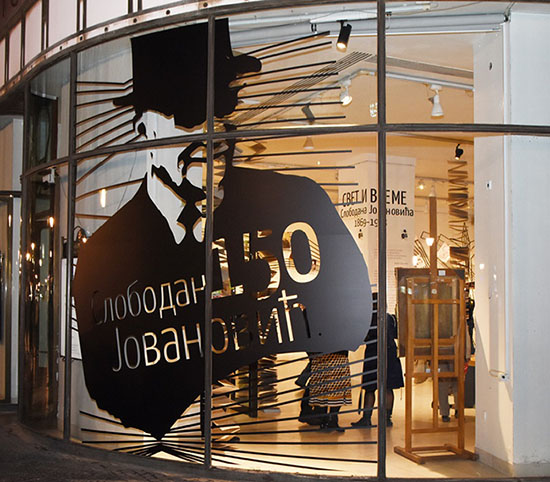 On the occasion of the celebration of 150 years of the birth of Slobodan Jovanović, as part of the programme of the Serbian Academy of Sciences and Arts marking the anniversary of the renowned Serbian scientists, the exhibition titled ‘The World and Times of Slobodan Jovanović (1869–1958)’, curated by Boris Milosavljević, PhD and senior research associate at the Institute for Balkan Studies of SASA, is on display at the SASA Gallery, from 5 – 27 November.

Slobodan Jovanović, one of the most distinguished scientists and professors of the University of Belgrade, was the president of the Serbian Royal Academy, rector of the University of Belgrade, dean of the Faculty of Law, editor of Srpski književni glasnik (Serbian Literary Gazette), president and vice-president of the Ministry Council of the Kingdom of Yugoslavia, founder and president of the Serbian Cultural Club. He was a polymath, educated at the prestigious universities of Europe. He wrote papers in various scientific fields, ranging from the theory of state and law, constitutional law, political philosophy, general history and Serbian history of the 19th and 20th century, sociology, to the study of literary works and literary and theatrical criticism.

He participated in the work of four governments, twice as a president and twice as a vice president.

At a political trial held in July of 1946, Slobodan Jovanović was sentenced in absentia to 20 years of forced labour in prison and confiscation of his entire property. He died in London in 1958. His collected works were re-published at the beginning of the 1990s. He was rehabilitated in 2007, and his remains were transferred to Belgrade in 2011.

All relevant aspects of life and work of Slobodan Jovanović, as well as cultural, socio-historical situation and circumstances in which he acted and worked have been represented at the exhibition. His contribution to culturohistorical and legal-political science has been illustrated, and new discoveries and curator’s interpretation of the origins, formation, development and scope of Jovanovic’s intellectual and social legacy have been presented, while existing knowledge has been supplemented by newly discovered data and archival records.

Curator guided tours are organized on Wednesdays and Sundays at 6 p.m.

As part of the celebration, a scientific gathering was held on 7-8 November and a monograph on Slobodan Jovanović is to be published.