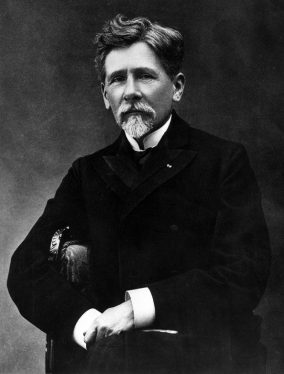 The year of Academician Sima Lozanić

In 2023, the Serbian Academy of Sciences and Arts marks the year of Academician Sima Lozanić (b. Belgrade, 24 February/8 March 1847 – d. Belgrade, 7 July 1935), one of our most prominent chemists, a distinguished politician and diplomat.

He was a professor and rector of the Higher School, the first rector in the history of the University of Belgrade, president of the Serbian Royal Academy, envoy to London, minister of the national economy and minister of foreign affairs.

His law studies, he completed at the Belgrade Higher School in 1868, and then he studied chemistry in Zürich and Berlin for the following four years with renowned scientists Johannes Wislicenus and August Wilhelm von Hofmann. The knowledge he acquired in the then-most modern European laboratories, he passed on through his educational work. As a professor of the Belgrade Higher School and the University of Belgrade, he paved the way toward modern chemistry by introducing the most contemporary findings into the curriculum, which he integrated into his textbooks on organic and inorganic chemistry. Sima Lozanić is an architect and founder of modern chemistry terminology in Serbian science. He introduced compulsory laboratory practices to the chemistry curriculum at the University of Belgrade. His textbook on inorganic chemistry is the first university textbook outside the then-Russia which mentioned Mendeleev’s periodic table of elements. During over 60 years of scientific work, he published over two hundred research and expert publications. His papers in organic chemistry and electro-syntheses had a major impact on world science literature.

He worked on the establishment of the Faculty of Agriculture. Working as the minister of economy, he had the opportunity to pass laws and boost the country’s industrialization, which contributed to the development of the Serbian state in this period. He made a tremendous achievement in the exploration of the natural resources of Serbia, dealing with the analysis of ore, minerals, meteorites, as well as mineral and potable water.

Academician S. Lozanić was a member of a great number of domestic and foreign scientific associations. He was an honorary president of the Serbian Chemical Society, and a corresponding member of the Yugoslav Academy of Sciences and Arts (JAZU) and the Czech Academy of Sciences.

As a chemist, he left an indelible mark on our and world science, while with his educational and political work, he contributed immeasurably to the development of Serbian education, economy and industry.